Assisting researchers to communicate the results of their work

For those working in socially and economically important areas, The Forrest Projectis keen to assist researchers to communicate the results of their work, particularly where it directly benefits communities. 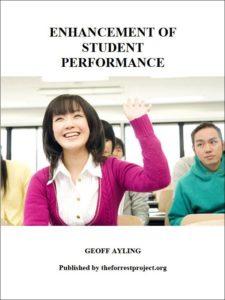 The Forrest Project is well aware that important work is sometimes undertaken which leads to findings that run counter to the mainstream of belief. Thisis particularly the case in education, where numerous teachers tend to do things the way they have for the past 30 years. Valuable research has recently shown that it is possible to transform the vast majority of children, so that they can perform at higher level at school and thereby, consider careers which their parents would not have thought possible. This important field has not attracted the attention of educators, to some extent because of the need for a more effective worldwide publishing process.

This field has been described in practical detail in a book by Professor of Education, John Shindler1,2 of Charter College, California State University at Los Angeles. The approach was trialed between 2007 and 2010 at the Qianhuang International College, Changzhou, Jiangsu Province, China (Table 1) and found to be highly effective with students who had not been selected for enrolment on the basis of advanced academic performance. The very encouraging results of the trial, with four separate cohorts of students, were described in a book by Geoff Ayling.

Geoff Ayling and Cash, Qian Xuefeng have assembled a team of teacher trainers. Two teachers will spend a year at a school in a developing country, teaching physics, chemistry and mathematics while training teachers of a school to set up enhanced student performance.

The importance of these findings cannot be exaggerated, both socially and economically. Ayling has emphasized the need for further research to enable teachers to better understand the factors which may affect timing of the transition in particular. He has suggested a number of independent variables which should be studied.

To undertake such research, several schools would be required to cover such a wide-ranging program. Fortunately however, this type of study can be undertaken by the individual teacher with no effect upon other teachers or the rest of a school. A school consisting of teachers with no understanding of transformative classroom management, together with others who do understand, should afford a means of in-school comparison. Such variability among teachers is a normal situation in most schools.

Working with an Editorial Researcher:

The Forrest Project would be interested to receive informal expressions of interest from several schools able to participate in a coordinated study of specific variables. As well, teachers may like to put forward other factors which they would prefer to examine.

The importance of such a coordinated study warrants publication as early as possible to alert and interest others in this new field. The Forrest Project would simultaneously plan the next electronic publication with collaborating teachers. This publication would have a short gestation time, in order to keep a wide list of other schools abreast of progress on this study.

Publication of the Results of Collaborative Research:

The Forrest Project considers that if success such as that achieved in schools in China could also be brought about in other countries, then there would be reason for excitement. The main objective for this research would have been fulfilled, viz. to arouse educators in other countries to become aware of the potential of transformative classroom management.

In order to fulfill the objective, an agreed program of rapid publication in order to disseminate results would be required. From experience this may only be achieved through electronic publication.

The Forrest Project would assign a suitably experienced researcher to this project, who would focus with school researchers upon planning and writing for the proposed publication.

Illustrations and Photography for the Title and Cover:

Designing the title and cover illustration could be critically important for the perception of many interested educators and parents. The researcher would ensure through adherence to quality assurance principles that are fully effective.

A Statement by a Distinguished Person:

A distinguished person would be sought to write the preface or foreword to this potentially important publication. Teachers are conservative and reassurance from such a person on the value of this research would be entirely appropriate.

Estimating Potential Interest in Other Languages:

Peoples living in developing countries should have the opportunity of learning of this development at the same time as schools in economically developed nations. It needs to be said at this point that the initial findings from the trials between 2007 and 2010 were obtained in a developing country.

The Project will as a result consult with specialists in other cultures to ascertain the extent of interest which might exist in this research. After all, there is a widespread hope in most parents of developing countries that their children will have a better opportunity in life than was available to them.

To estimate potential clients in other languages, translators will be sought to verify possible interest.

Automating Percentages of Payments from Sales to be Paid Direct to Agreed Accounts:

The Forrest Project is able to structure agreed percentages of income from sales, so that they are automatically paid into the accounts of verified recipients, i.e.The Forrest Project and its partners, schools, researchers and translators.

Payments will be automatically transmitted to agreed accounts as sales occur.