Development of Brain Structures, Transition in Self-esteem and Academic Performance

Adolescence is a period when development of the brain involves a shift from emotion-centered responses of the hypothalamus-amygdala, to reasoned control through the prefrontal cortex. It is also a time when modulation of the hippocampal stress response occurs, leading to the more intense, shorter duration response of adulthood. Enhanced self-esteem and internal locus of control have also been associated with reduction of hippocampal activity. These characteristics have recently been shown to be dynamic, apparently enhanced in students by a teacher utilizing social and experiential factors. Here, all except ten percent of students experienced the transition to higher levels of self-esteem and internal locus of control. Many were however handicapped by a mismatch between their level of development and the period of study. These studies demonstrate that the developmental progress of students is inherent in the meaning of education.

Adolescence is a critical time in the human life cycle (Sisk and Zehr, 2005; Weinberger et al, 2005; Blakemore and Choudhury, 2006; Blakemore, 2008ab; Johnson, 2008). Characteristic behaviours of adolescents have been explained as the result of a shift from the impulsive, fear- and emotion-centred responses of the hypothalamus-amygdala, to reasoned, discerning and abstract thinking, possible through the prefrontal cortex (Spear, 2000; Giedd, 2004; Paus, 2005; Blakemore et al, 2007; Wekerle et al, 2007; Fox et al, 2008).

The stress response of adolescence changes upon entering adulthood. Initially, stress response is epigenetically modulated in the postnatal period, through maternal care that causes changes in stress behaviours (Meaney, 2001; Weaver et al, 2004; Meaney and Szyf, 2005; Weaver et al, 2007). The characteristic stress response in adolescents involves acute increases in concentrations of cortisol, over periods of longer duration than adults. Stress response is then further modulated in adolescence, through an unidentified mechanism, which in adulthood results in higher concentrations of cortisol with shorter duration, presenting less risk of impairment to the hippocampus (Romeo et al, 2004; Romeo et al, 2006). This period of developmental change has also been noted (Romeo and McEwen, 2006) as a possible time for introducing interventions, to mitigate negative consequences of earlier developmental insults.

It is necessary that these changes occur, otherwise an individual in adult life will be at risk of diseases of developmental origin, particularly obesity, diabetes type 2, hypertension, cardiovascular diseases, autoimmune dysfunction, impairment of neurodevelopment and certain cancers (Young and Altemus, 2006; McEwen, 2007).

Modulation of the stress response in adolescence also has serious implications for learning and memory functions of the hippocampus (Gianara et al, 2007; Reul and Chandramohan; 2007). Imaging has proven to be a convenient way of documenting impairment and atrophy of the hippocampus. Maturation for example, has been shown in this way to result in significant volume expansion (Suzuki et al, 2005). Adolescents need hippocampal functions in good working order if they are to obtain an education and have a career.

A study undertaken in China in 2007, with 90 adolescent students, has now shown self-esteem and internal locus of control to be dynamic (Ayling, 2011a,b). Behavioural science theory suggested that these characteristics could be fostered in students through the application of social and experiential factors (Shindler, 1998, 2009). This was tested with meticulous recording of changes of these characteristics in students, whose exposure to the factors was maintained over an eight month period. Ninety percent of the students were found to have experienced a positive transition in both self-esteem and internal locus of control. Some experienced the transition over a period of less than one month, while for others it occurred over several months. A small number did not appear to complete their transition within the eight month period of study. About 10 percent did not appear to experience it at all.

There remains however a need to confirm the hypothesis that self-esteem and internal locus of control and hence, modulation of the hippocampal stress response, can be achieved through exposure to social and experiential environmental factors.

Establishing cause in the education process is unfortunately confounded by the existence of many independent variables, such as population differences among students, positive and negative effects of different teachers, different education curricula and the effects of various teaching and learning strategies. Causality can as a result only be established if unambiguous criteria can be identified, which positively confirm that the changes in self-esteem and internal locus of control result from the actions of a teacher.

The causes of differences in academic performances between schools are widely recognised as difficult to establish. Figure 1 illustrates the differences in academic performances between 595 schools in New South Wales, Australia, seen as the percentages of high achievers presented at a state-wide university-entrance examination (Board of Studies, 2005). Only a small number of schools were able to present 10 to 70 percent of their students as high achievers. The vast majority presented from zero to 2.5 percent. This wide disparity among schools illustrates the effect that can result from these variables.

Introducing experimental controls to establish causality, when investigating the academic performances of students, has difficulties. It would be impracticable for example, for a teacher to exclude some students from the education process for eight months, then to test their self-esteem and locus of control. If these students were taught by different teachers, then they cannot be compared, nor may their performances in different subjects, particularly if taught under different curricula.

Causality may however be established upon correlating self-esteem and locus of control with:

The aim of this study was to replicate the transition and its duration in a further cohort of 90 students. Most importantly, it aimed to establish the extent to which students appeared to be handicapped, due to any mismatch between a student’s developmental progress and the period of academic study.

Ninety 18-year old students, selected in 2008 from a similar population cross-section as in 2007, were enrolled to study university-entrance subjects over an eight month study period. These students, of whom 42 percent had during middle school been diverted to study the humanities, were clearly not from a select population with an affinity for the sciences and mathematics.

As for the trial in 2007, the students of 2008 appeared to experience progressive enhancements of their self-esteem and internal locus of control (Table 1). This progression was observed in each of the eight months of the study period, with significant increases still occurring in months 7 and 8. If measurements had continued after month 8, then more students may have completed their transition. In 2008, 89 percent of students experienced the transition compared with 91 percent in 2007 (Table 2).

The arbitrary description of a student having ‘completed’ his transition arose from the finding in 2007, that upon reaching maximum scale values for self-esteem and internal locus of control, no further increases were observed during the study period. The academic performance reached by these students was commensurate with their newly acquired developmental level.

At this level, all students consistently achieved marks of 90 percent or more (‘high achiever’, described in Figure 1), based upon standard questions asked in university-entrance examinations. At the end of the study period in 2007, 81 percent were at the high achiever level, whereas in 2008, only 51 percent were able to consistently demonstrate this level of academic performance.

The transition occurred at different times throughout the study course (Table 2). In 2008, 27 percent had completed within 4 months, whereas in 2007, it was completed by one student in this time. In 2008, 24 percent of students completed between months 5 and 8, whereas 80 percent completed in 2007.

A further significant difference was found in 2008, when 38 percent did not complete within the eight month period, compared with 9 percent in 2007.

In 2007 there were 13 students whose thinking appeared to resemble Piaget’s (1930, 1952, 1960) third cognitive stage (concrete operational thinking, from the age of 7 to 11 years). Of these, 8 students who did not undergo any transition had this type of thinking, 4 appeared to undergo a transition to the fourth cognitive level and 5 were among the 10 percent whose transitions might perhaps be completed after the 8 month period. In 2008 only 2 students with this level of thinking were enrolled and neither experienced the transition.

To summarise, the 2008 cohort commenced their transitions earlier, with many more however unable to complete within the study period. Both cohorts were consistent, with 91 and 89 percent experiencing the transition. However, the 2008 students included a significant group of 38 percent who appeared to have been handicapped, due to a mismatch between their stage of development and the study period.

The feasibility of assisting students to achieve higher levels of academic performance, commensurate with their new stage of development, appears to have been confirmed. There are however many questions that need to be investigated, before this principle can become generally available

Most importantly, research is needed to confirm that this exposure of students to social and experiential environmental factors, is in fact epigenetic. Exposure to an environmental factor for this purpose, could well become an intervention to achieve normal development in adolescents. The implications for students’ health and education are far-reaching.

The 9 percent in 2007 and 38 percent in 2008, who did not complete their transitions within the eight month period, must be regarded as a significant difference. These students were without doubt handicapped, but still well ahead of their counterparts who were unable to develop.

It cannot be assumed that the length of the study course was in fact the cause of the handicap for these students. Nor is it reasonable to assume that exposure of the students to the factors could have had a different result if commenced prior to the course of study.

A more important consideration is the nature of the transition in self-esteem and locus of control, which needs to be better understood. As stated, there are numerous independent variables which may affect the academic performances of students and hence, their transitions.

Among the possible factors should be considered:

A handicap clearly exists for students who have only achieved partial enhancement of their self-esteem and internal locus of control. That is, they have not reached the level where they can function at full potential. However, this does not mean that these students will not be able to pass examinations and be enrolled in a university degree course. In fact, of the 90 students in 2007, 89 were successful in their university-entrance examinations.

In contrast, students who have not received the social and experiential environmental exposure needed to enhance their development, must be considered to be the ones who are truly handicapped.

At this point the meaning of education comes into question. At the present time, education curricula in many countries make no direct distinction between the stages of development reached by students. It is therefore fundamental that the meaning of education should include, the need for every student to receive assistance toward achieving normal stages of development. These stages, rather than the ages of children, should constitute the steps progressed through as they receive their education.

A good understanding of the developmental transition and the most effective approach to achieving it, is now a matter of urgency.

Future research in 2009 with a further cohort of 90 students, will aim to ascertain the most effective schoolwide management, needed to maintain the exposure of students to the social and experiential environmental factors.

As well, collaborations will be sought with other schools in a wide range of situations, with encouragement for them to enhance the educational potential of their students by inducing the transition.

A search will continue in an effort to identify a medical research partner organisation, which is prepared to study the physiological, neurodevelopmental and epigenetic changes, which undoubtedly occur in students while undergoing the transition.

This replication study, with a similarly large cohort of students, has again demonstrated the existence of the transition in self-esteem and internal locus of control. It has shown that assistance may be provided to students to enhance both development and academic performance, commensurate with their new stage of development. The developmental transition needs however, to be studied further and better understood, before this principle can become available to every student.

Students who experience only partial attainment of their potential level of development, with commensurate academic performance, must be regarded as significantly advanced upon students who have not had the opportunity or been able to experience the transition. 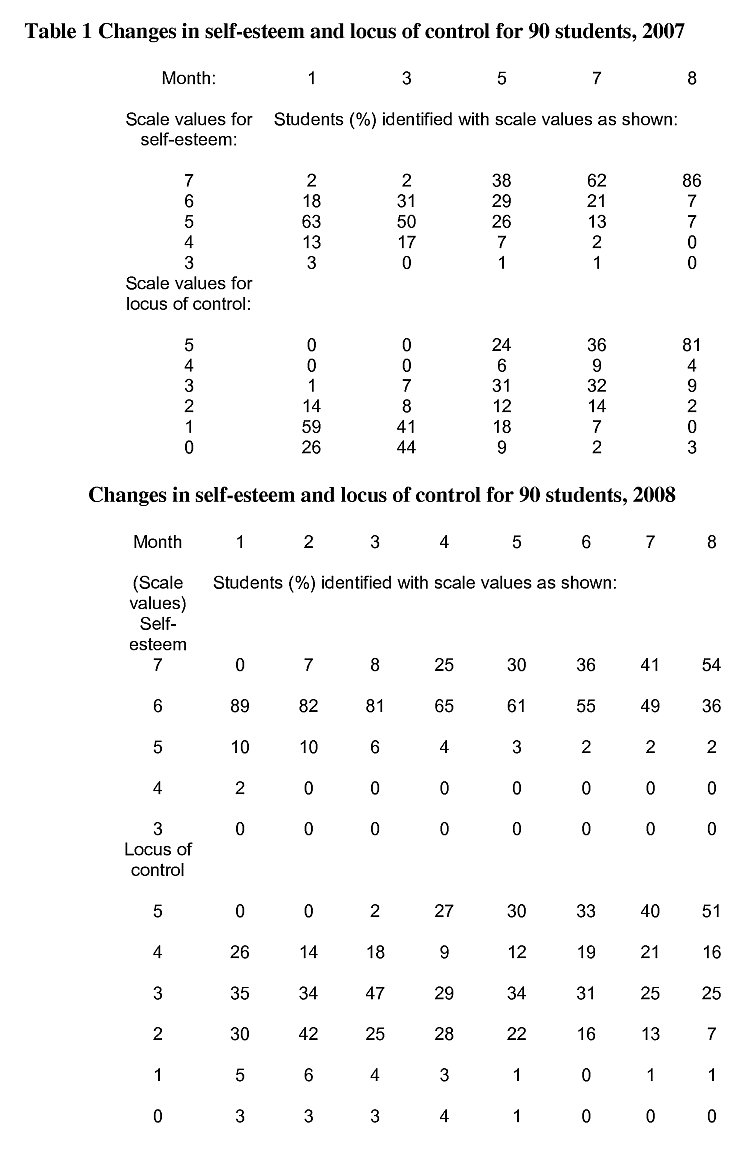 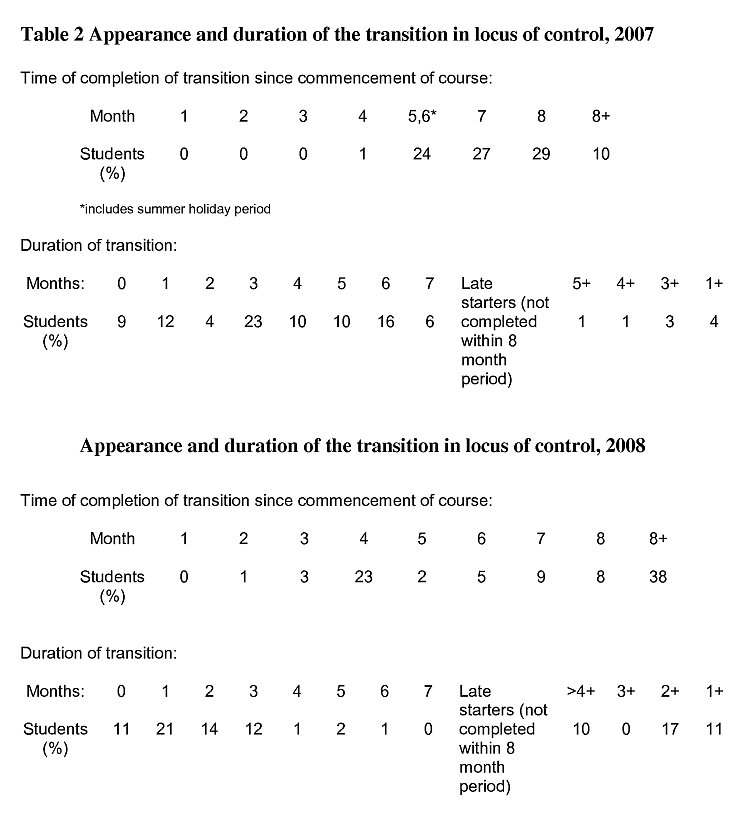