An Intervention to Benefit Health and Education

Epigenetic activity in embryogenesis is known to result in metabolic syndrome diseases and cancers in adult life. Maternal care has been shown to epigenetically mediate the stress response. When unsuccessful, repeated long-term release of glucocorticoids can lead to atrophy of the hippocampus, loss of memory and learning ability, hypertension, cardiovascular disease, diabetes, immune dysfunctions and mental illness in adult life. Interventions are being sought to overcome health risks from aberrant epigenetic activity. Here an intervention trial is reported, in which 90 students were assisted to enhance their self-esteem and internal locus of control, critical components of the stress response. The intervention was found to be routinely practicable, with students’ stress responses, learning and memories improved. It should lead to a reduction in diseases in adult life. Insufficient development should no longer handicap students’ education. When operational, significant sociological and economic benefits should result from overcoming the worldwide breakdown in education.

Interventional strategies are being sought to avert health risks and diseases resulting from aberrant epigenetic activity. This has become the principal objective for many research groups.

The potential for epigenetic activity to be reversed through dietary intervention, was clearly demonstrated when the activated hippocampal exon 17 glucocorticoid receptor promoter was found to be hypermethylated by L-methionine. In this instance a dietary supplement reversed the epigenetic activation of a gene.

In order to understand the relationship between dietary interventions, proteome changes and cancer, Milner concluded that it was necessary for functional proteomic studies to account for all proteins produced by a species and to link their physiological significance within the cell. This information would then make possible approaches to reduce dietary cancer risk and tumour behaviour. However, the different processes that occur following transcription also need to be well understood. Protein products must be in compatible forms to enable a relationship to occur with a particular food component. There must occur a coincidence of favourable molecular changes among the proteomes. For a particular food component to ultimately influence a number of key molecular events involved in cancer prevention, it must be present in an effective concentration at a target site, as well as in the correct metabolic form in association with one or more small molecular weight signals in a cell.

The need for interventions to be identified has become increasingly urgent following investigations of epigenetic activity during embryogenesis and the post-natal period.

In embryogenesis, maternal nutrition and habits were reported by Gluckman and Hanson to result in type-2 diabetes, obesity, hypertension, cardiovascular disease and cancers of epigenetic origin. The foetus incurs the risk when adaptive responses form during the first trimester of pregnancy, predicting a future environment based upon the mother’s nutrition, which can be quite different from that actually experienced. It was concluded that unbalanced nutrition in early life could with further research, lead to the development of intervention strategies. Grave concern is now held for large populations in India and China, which are rapidly entering different socioeconomic conditions, with changes to their patterns of nutrition and lifestyle.

Groups of researchers have been active in the search for interventions to avert this particular epidemiological risk, which is on a scale rarely encountered.

Waterland and Jirtle sought to identify early life nutritional interventions and corrective therapies. They proposed that genomically imprinted genes and specific transposon insertion sites, particularly susceptible to chronic adult diseases, should be investigated. Dietary supplements such as folic acid, vitamin B, choline and betaine, were used to target transposable elements, only to find that folic acid altered the phenotype of mice offspring, conferring epigenetic metastability. These investigators became the first to use an in vivo model, to demonstrate that nutrition during development could induce persistent changes in the epigenetic regulation of genomically imprinted genes. They also obtained the first evidence that in utero dietary genistein would affect gene expression and alter susceptibility to obesity in adulthood, through permanently altering the foetal epigenome. Jirtle et al subsequently showed that early developmental exposure to the well-known carcinogen bisphenol A, could change the phenotype of offspring by stably altering the epigenome, an effect that could be counteracted by maternal dietary supplements.

Finally, this group found the genes that result in cancer, which were most prone to epigenetic dysregulation, were insufficiently defined. Neither the environmental factors that affect the epigenome, nor the critical windows of vulnerability to induce epigenetic alterations, had been adequately characterized. They were therefore unable to account for the growing evidence of disparities in gene expression, which played a role in differential susceptibility to this disease. This line of investigation was concluded to be fundamentally handicapped.

Other researchers have reviewed recent advances in the therapeutic modification of epigenetic marks, which may lead to the design of new therapies for age-related disorders including cancer, autoimmune disorders and others. In the case of maternal care however, which epigenetically programmes mediation of the stress response in offspring, there appear to exist a number of possible intervention strategies. Interventions may be possible from not only dietary but behavioural environmental factors.

Maternal care in early life has been shown by Meaney et al to mediate the stress response, through activation of the hippocampal exon 17 glucocorticoid receptor promoter. Glucocorticoid feedback blocks synthesis and release of the corticotropin-releasing factor, reducing hypothalamus-pituitary-adrenal responses to stress. It is necessary to achieve a reduction in the release of glucocorticoids from the hippocampus under stress. Repeated, long-term release leads in adult life to atrophy of the hippocampus, hypertension, heart disease, diabetes, immune dysfunctions and mental illness. Impairment of the hippocampus initially leads to loss of memory and learning ability.

The epigenetic mechanism has been shown by this group to occur with differential effectiveness, depending upon the level of care shown by the mother under adversity. This can to some extent be overcome through more effective maternal care involving a further gene, the nerve growth factor-inducible protein A transcription factor, bound to the exon 17 glucocorticoid receptor promoter within the hippocampus. The group is also studying the influence of maternal behaviours on the gamma-amino butyric acid receptor system, which is of critical importance to the expression of behavioural and endocrine responses to stress.

The maternal adversity vulnerability and neurodevelopment (MAVAN) project has now been commenced. It is a study of the effects incurred by populations as a result of differential maternal care. Interventions are expected to result, which may optimise health prospects for children from early childhood until well into adult life.

The aim of this study was to trial the intervention, ascertaining the feasibility of routinely assisting adolescent students to enhance their self-esteem and internal locus of control and in so doing, improve their learning and memory.

Ninety 18-year old students enrolled to study university-entrance subjects were selected for the trial. Enhancement of self-esteem and internal locus of control was undertaken simultaneously with a traditional teaching and learning approach for the study of physics.

The program of enhancement involved the development in students of behaviours that provide a practical means of enhancing self-esteem: locus of control, acceptance-belonging and self-efficacy.

Internal locus of control was enhanced through promoting a clear understanding of cause and effect within the student. Each individual needed to see that achievement for which he was accountable, was directly related to his level of effort.

Acceptance and belonging were fostered among students through the behaviours that were accepted, assessed and managed, together with the attitudes and values that create reality in classrooms.

Sense of self-efficacy was generated from evidence that confirmed to a student that he had done something well.

Monitoring of self-esteem and locus of control was based upon estimations by a teacher, using behavioural criteria as shown in Table 1. Students’ study notebooks and formal testing provided the basis for estimating the development of each student.

The students appeared at the outset as shown in Table 2, to have had lower levels of self-esteem and internal locus of control, which increased significantly during the course of study. This suggested that their stress response levels had been mediated during the study period.

Clear relationships are shown in Figures 1 and 2 between academic performance, self-esteem and internal locus of control. This was expected following earlier reports of correlations between academic performance and self-esteem and internal locus of control. The figures also indicate that the learning and memory abilities of these students were increased in nearly all cases.

Shindler has noted that the techniques for enhancing these characteristics are well known, yet through lack of understanding are not routinely practised. The trial confirmed that the intervention was both feasible within a school context and routinely practicable.

It is concluded that self-esteem and internal locus of control may in this way be changed by a teacher, in order to assist students to achieve higher academic performances. As a result of this process a teacher may assist the growth and functioning of the hippocampus of each student. This has not been reported before.

The implications of these findings are significant. Reduction in the stress response, accompanied by an improvement in the functioning of the hippocampus, indicate that this intervention may very likely reduce the risk in adult life of impaired learning and memory, metabolic syndrome diseases and certain cancers. A teacher’s routine enhancement of self-esteem and internal locus of control may therefore be regarded as a component of preventative medicine, which benefits the health of adolescents.

This intervention could also be considered to be an act of essential developmental assistance for adolescents. Such assistance concurs fully with the theories of human development of Ericksonand Chickering. The importance of assisting adolescents to progress through important stages of their development has been stressed by education psychologists. A well known researcher, LeCapitaine has commented ‘of what good is it to graduate the mind but to lose the person?’ Many researchers have complained that education authorities have for too long failed to heed the need to assist children to develop.

Numerous writers have described the breakdown of high schools, as having tragic sociological consequences for families and a significant factor in the economic progress of the United States and other countries. The breakdown appears to result from the failure of students to achieve sufficient development to cope with educational studies. Millions of families each year witness a student child unable to obtain an education and hence, a career path that should be followed. There are as a result insufficient numbers of students coming through high schools and entering universities to study technology and the sciences.

The trial of this intervention to mediate the stress response, through a teacher routinely enhancing the self-esteem and internal locus of control of students, is both feasible and practicable. The intervention can avert significant health risks for adolescents and as well, offers educational, sociological and economic benefits, on a scale that can be described as of national significance.

Table 1. Criteria for evaluation of students’ self-esteem and locus of control

Table 2. Changes in self-esteem and locus of control for 90 students

Figure 2. Graph of academic performance vs locus of control 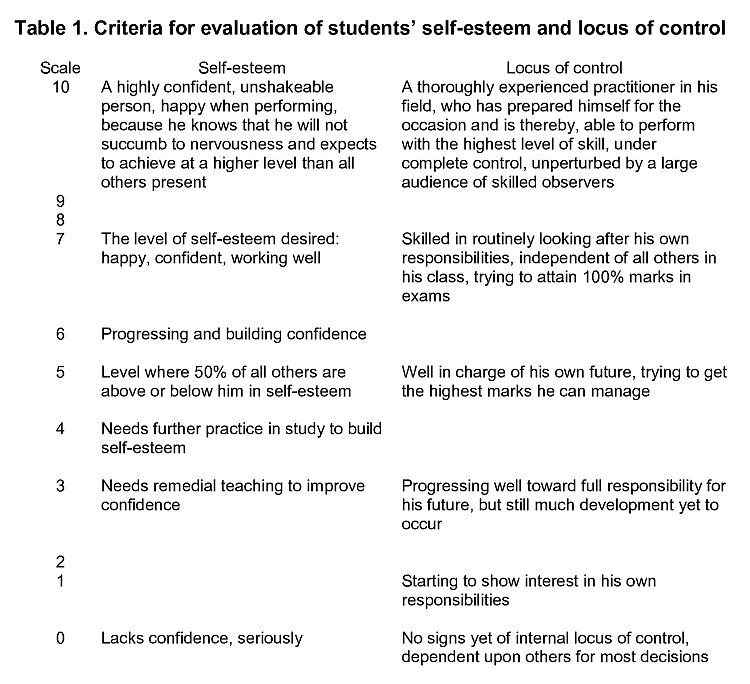 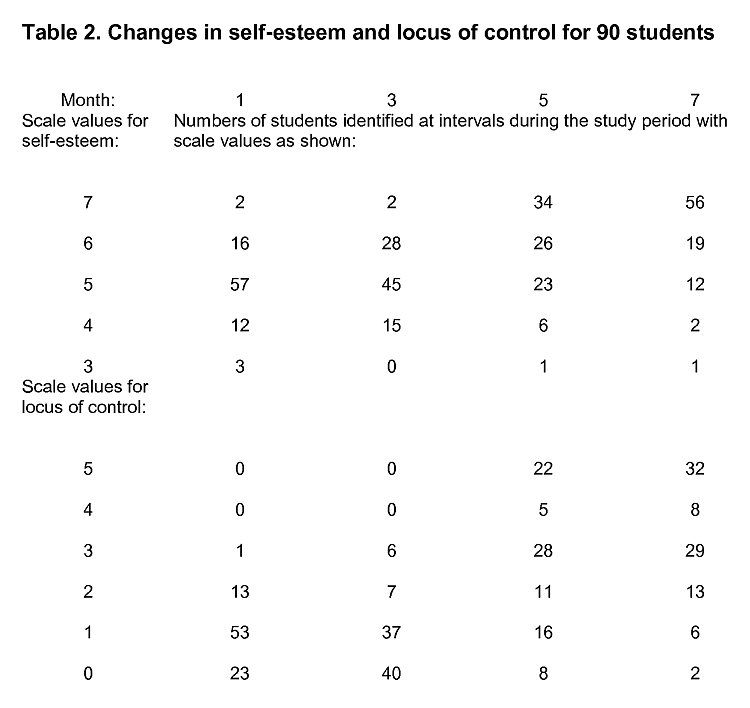