The Need to Catalogue Paintings of Investment Value:

Our records show that Forrest paintings have been displayed and sold in London, Glasgow, New York, San Francisco, Vancouver, Sydney, Melbourne, Launceston and Hobart. The prices being paid in the 21st century, forthis minor proportion of the artist’s works to have been seen publicly, are nearly more than $10,000. Many have been valued at between A$20,000 and A$80,000. They have become investment commodities. However, we have estimated that there are still as many as 2,000 Forrest paintings still hanging onwalls of the homes of descendants of the original owners, mostly in Tasmania and the UK. For descendants of Haughton Forrest, these are not investments because we have no intention of allowing them to go out of the family. 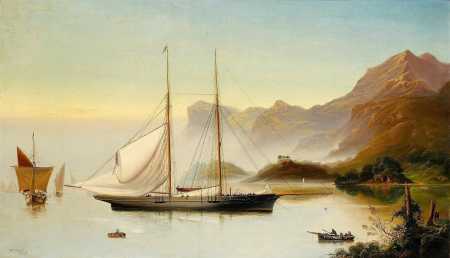 Paintings of such value need to be documented for security reasons. Many do not bear the artist’s signature, although to a person who is an authority on these works, there are clearly identifiable features which characterize the paintings of Haughton Forrest. In many instances a painting can be recognized as very likely the same painting which was reviewed when the artist first exhibited it in Britain, Launceston or Hobart.

The Catalogue contains records and images of Forrest paintings in taxonomic groups, i.e. the artist’s earlylife in Germany, named vessels, shipwrecks, sailing off recognisable coastal landmarks, Scottish scenery, mountains and lakes of Cumbria, Hobart and Mount Wellington, the Derwent River, the Tasmanian hinterland, anonymous rivers and lakes, portraits and still life paintings. Many of these paintings were from the same locations, differing in minor detail. Positive identification can also be made if a painting belonged to a known group, e.g. paintings of Mount Wellington from the Huon Road.

The Forrest Project has a long-term and unachievable aim, to obtain images of all of Haughton Forrest’s paintings. We are well on the way with images of more than 20 percent and records for about 50 percent of his paintings. All private owners have been guaranteed their rights to privacy and security, with complete anonymity of ownership and the locations of paintings.

Working with Specialists in Forrest Paintings: 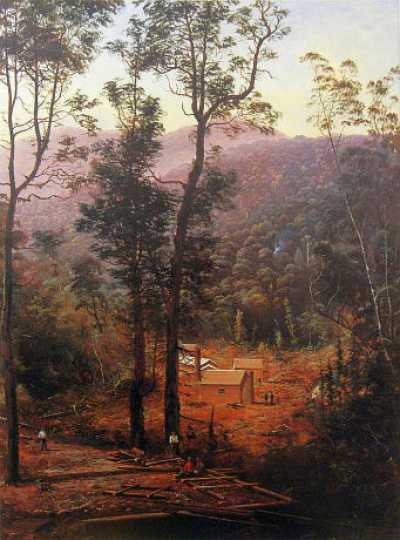 Geoff Ayling is the Principal Researcher for The Forrest Project. He will work with an owner of a painting by email and provide assistance to obtain the best possible photograph. Alternatively, someone who has a traditional photograph may require assistance to scan it. An image will then be sent by return email showing how the painting looks under the century of oxidized residue, which can give a grey appearance. If the owner is interested, he/she can be shown how to download the cost-free software which enables this image to be obtained. This would provide the basis for deciding whether to consider paying to have the painting professionally cleaned.

There is also a need to record the description of a painting of interest. This is because the names of paintings of a particular subject have sometimes been given the same title. In the case of the well known Russell Falls painting, which was featured on a Tasmanian pictorial postage stamp in 1899, there are currently two paintings which have recently been displayed publicly. The painting from which the stamp was taken, currently in a gallery in Sydney, is in the shape of a portrait. However, the other Russell Falls, auctioned in England, is shaped as a landscape.

The owner is requested to measure the dimensions of a painting. This is done in centimetres using a tape measure, recording the height and width of the visible part within the frame.

As well, if a signature exists, then its location should be recorded (bottom left, bottom right or even on the reverse). As well it should be noted whether the artist wrote his full name, initials or first name only. Contrary to the assumption of someone in the past, his name is Haughton Forrest (written as H Forrest), not James Haughton Forrest (supposedly written as JH Forrest). Sometimes the H and F have been written together which has led to confusion. Any writing by the artist on the reverse side should be recorded as an item for catalogue identification. A reference to a recipient’s birthday can be used as the date for completion of a painting.

In the opinion of authorities on Forrest paintings, a forger would find it intimidating to copy a publicly known painting if it were available at the highest possible resolution. This artist’s style in painting minute detail is characteristic of the person. Another artist would find it very difficult to copy that style.

The fact that a painting had become widely known together with its fine detail, would tend to deter a forger because of the risk of rapid detection. Some website art reporters that display images of paintings with poor resolution would on the other hand, suggest to a forger that if a painting were not known in fine detail, that a copy might be sold with little risk of detection in the short term.

Ongoing Research and Distribution of Dated Versions of the Catalogue:

The Catalogue will continue to receive additional records and images as auction houses display paintings and data for future auctions. Indications from owners have led to the conclusion that many of the 2,000 Forrest paintings, which have not been seen publicly, will be catalogued over time.

As a result The Forrest Project will make the Catalogue available as dated versions containing entries for paintings as they are received. The 4th edition of this 2 volume Catalogue is now being compiled for release later this year (2017).

In order to make individual Forrest paintings as visible as possible for security reasons, all owners who contribute a photograph and identification details of a privately owned painting will receive an ex gratiscopy of the Catalogue and a Catalogue Certificate to verify their painting’s inclusion in the Project.

Use of the Catalogue by Galleries, Libraries, Auction Houses and Owners:

Ready availability of the Catalogue is considered to be of interest to galleries, auction houses and collectors, who wish to understand when a painting was executed, whether it was part of a group painted at a particular location and very often the name of the painting given to it in the 19th century. Perhaps the most important use for many will be as a guide to prices paid at auctions since the 1970s.

If you would like to participate in this project by including your Forrest painting(s) in the Catalogue, and subject to verification have them recorded in The Forrest Project Registry, receive an official Catalogue Certificate and obtain an ex gratis copy of the Haughton Forrest (1826-1925) Biography and Catalogue of Paintings, please click here.

We guarantee that your ownership and location details (beyond a Capital City) will not be disclosed to any other individual or organization, or used for any other purpose. 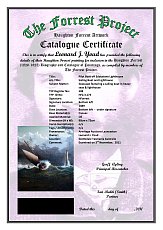